The biggest thing that has been weighing on our minds is getting the title of the bus updated to read “motorhome”.  The reason this is so important is because, as the bus is currently, we need a commercial driver’s insurance policy as well as a commercial drivers license.

Our temp tag expired back in December so we don’t even have that right now.  It is somewhat of a catch 22 because we obviously can’t go drive the bus/ have the bus worked on without those things…. but we can’t get those things until we have met the 4 of the 6 following Colorado requirements to have the bus considered a recreational vehicle.

Cooking: This requirement, I am confident we will satisfy. After a lot of research, I have ordered a marine alcohol stove range for Savannah.  It is really cool for several reasons. First, because it is non-pressurized, it is safer than propane or butane stoves because the fuel is not explosive.  Secondly, if it got out of control, alcohol fires can be put out with water! We also like the idea of it being totally self-contained.  We won’t have to put holes in the bus to a propane tank supply and we can move it inside, outside, and store it in a drawer. Finally, it is one of the most fuel efficient options out there and will allow us to cook while boondocking without issue! I never thought I’d be this excited about a cook top! 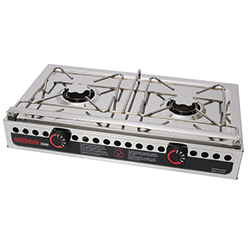 Refrigeration or Ice Box: Check! So I don’t know how picky they will be about this.  We have our chest freezer that we will be converting into a low-power fridge but it won’t be plugged into anything for the inspection.  It has a drain so we plan to put ice in it and call it an ice box for now.

Self-Contained Toilet: Check! Thanks to the Nature’s Head composting toilet, this is an easy one.  We won’t have the vent hooked up yet but I am pretty sure this will pass the test. We probably won’t have walls around it yet. The requirements don’t mention anything about privacy, haha! 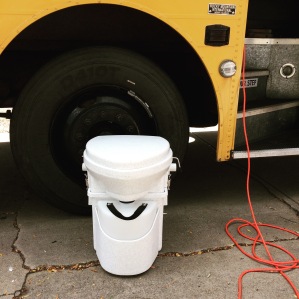 Heating and/or Air Conditioning: Not yet. We have our little potbelly stove for heating but it won’t be set up yet.  This requires us to cut a hole in the ceiling (which we are obviously nervous about) to make a chimney. We might throw the stove in there(?) and if  they question it, tell them our intentions and call it an “accent piece” for the time being.

Potable Water Supply System Including a Faucet and Sink: Yep! I spent a day last week figuring this one out.  We purchased a manual hand-pump faucet from Amazon.  I got some tubing and drain pipes plus two 6 gallon jugs.  One jug is for the fresh water and one is for the grey water.  We plan to eventually set up the other faucet so that we can hook up at campsites, but this will be a good solution for now and for future boondocking scenarios!

Separate 110-125 Volt Electrical Power Supply and/or LP Gas Supply: Far from it. We will throw Zac’s vagabond battery in there and maybe plug some string lights up to it but this most likely doesn’t qualify.  Fortunately, I feel pretty good about 4 out of the 6 requirements.  Now we are just trying to make the bus look half way presentable for this in hopes that they won’t give us a hard time when we try to change the title.

There was an error retrieving images from Instagram. An attempt will be remade in a few minutes.